This little, old lady arrived in our ER febrile, malnourished and anemic. Her history was sort of interesting. Two weeks ago she had an open left colectomy performed at another hospital for what sounded like chronic diverticulitis. A primary anastomosis was done and she sort of lingered for a while in a nursing home afterwards. Her family resides near my part of the world and so, as she continued to not thrive, they transferred her to my hospital. She had had multiple cardiac catheterizations and was on plavix and aspirin. Her presenting hemoglobin was 7.6. WBC 9K but with significant left shift. Exam revealed right sided abdominal tenderness with some guarding. Rectal revealed frank melena. We obtained a CT scan and here's some images: 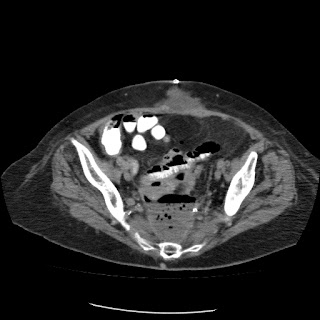 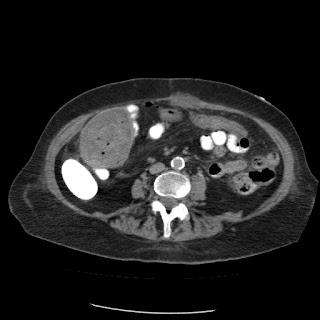 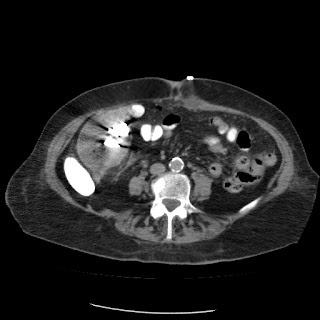 Antibiotics were started, IV resuscitation including 2 units of PRBC. She was hemodynamically stable, but just didn't "look right". I had GI do a EGD that night to rule out proximal source of blood loss. An eschar was seen over a deep duodenal ulcer in the bulb. Fortunately, it wasn't bleeding and no intervention was done other than IV Protonix. Now about those CT images. Any ideas about what's going on? What to do next?
Posted by Jeffrey Parks MD FACS at 11:38 AM

Where is everybody? Curiosity is killing me. Wish I could read CT's better, okay, at all. Can't quite figure out what's left of her colon....

to be honest i didn't comment because i can't make out much on the scan. i'm not sure if those are clips in the liver from previous chole or sreious stones or contrast from fistel. sort of think there might be air in the liver but not sure. makes me wonder about the quality of the image on my computer. you'll have to help uus a bit here. what did you see on scan?

Was off the computer for a while. Sorry for the delay. Only 2 comments though. Ol' Doc Schwab can riff on pilonidal diseaee and he gets 20 commebnts.... alas. Such is the hierarchy of surgery.

I took her to OR. Right upper quadrant fluid collection indeed was a large abscess with a retained lap sponge. The abscess in the pelvis had some green liquid associated with it; I was concerned about perhaps an anastomotic leak so I did loop ileostomy as diversion. Washed everything out and placed drains in the residual abscess cavities. Post op day 2 there was bile in the right upper quadrant drain.... any ideas why?

there are 3 possiblities 1) dudenal injury during removal of the sponge causing dudenal fistula . 2)iatrogenic bile ducts injury 3) small bowel injury or fistula proximal to the stoma

I scanned her on Post op day five . The right sided JP drain was putting out 30cc a day of bilious fluid. The scan essentially showed a small, well drained fistula from small bowel (not duodenum) to into the drain. It should close. Most bile is passing into the ileostomy. Interestingly, the pelvic drain is now putting out a thick black feculent fluid, consistent with original hypothesis of anastomotic leak.

I scanned her on Post op day five . The right sided JP drain was putting out 30cc a day of bilious fluid. The scan essentially showed a small, well drained fistula from small bowel (not duodenum) to into the drain. It should close. Most bile is passing into the ileostomy. Interestingly, the pelvic drain is now putting out a thick black feculent fluid, consistent with original hypothesis of anastomotic leak.

this is a nightmare for a surgeon small and large bowel fistulae, need TPN till fisutla close ,, did it close after ?