Jon Stewart with a dead-on Glenn Beck.
The 11/3 Project

I performed an uneventful laparoscopic right colectomy on gentlemen a few weeks ago that went quite well. The following morning he was started on clear liquids and he was ambulated to the hallways. He looked great. His vitals were pristine. His abdominal exam was benign. He had excellent bowel sounds (I know, unreliable but I like hearing them nonetheless) and was even passing gas. His CBC, however, showed a WBC count of 15.7. Reactive white blood cell counts 18 hours after surgery are pretty much par for the course and they don't really bother us as long as the patient is doing well clinically.

When I saw him later that afternoon, he was tolerating his liquid diet and was making laps around the nursing station with his IV pole. But he asked me, "doc, why did I have to get all those needle sticks and tests today?" I had no idea what he was talking about. So I checked the chart.

The primary care doctor saw the WBC count that morning on rounds and was obviously much more concerned than I was. Eminently concerned. Freaked out would be another way of putting it. So this was what was ordered: blood cultures x 2, urinalysis and culture, CXR PA and lateral views, sputum cultures, an ID consult, and a CT of the abdomen and pelvis!!!!

I was able to get the CT scan cancelled but the rest of the orders were carried out as written. The ID consultant's note was two sentences. None of the cultures grew out anything. The CXR was negative. The patient went home two days later...
Posted by Jeffrey Parks MD FACS at 8:52 AM 13 comments:

That doesn't belong there... 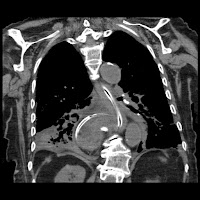 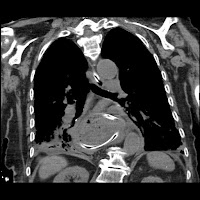 This elderly (mid nineties) lady presented with nausea and profuse vomiting for a couple of days. An NG tube was placed and the above scan was obtained. What you're looking at is an incarcerated paraesophageal hernia complicated by a gastric volvulus. She was taken semi-emergently to the OR where the stomach was reduced from the thorax, the sac taken down, the hiatal crura reapproximated, and a gastropexy was performed. She actually recovered quite well...
Posted by Jeffrey Parks MD FACS at 7:42 AM 5 comments: