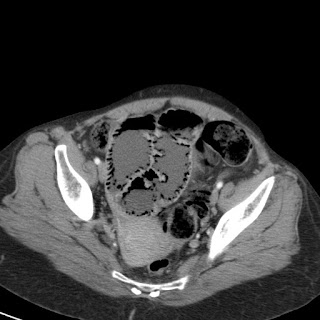 This case drove me crazy. She was a mild mannered, soft spoken 38 year old African American woman who presented with nausea/emesis and abdominal pain. On exam her abdomen was distended and she was pretty tender in the periumbilical area. This was her third admission to a hospital over the past 12 months with such symptoms. She carried a past medical history of scleroderma, but no previous abdominal surgeries. Bowel obstruction in a young woman without previous surgeries sets off the alarm in my mind. On exam, she was actually pretty tender diffusely, arguably with rebound in the lower quadrants. Then I looked at the CT. The radiologist actually called me, and said I better hustle to see this lady because she had one of the worst examples of pneumatosis intestinalis he'd ever seen. Then i started reading up on scleroderma and its GI manifestations. There is an entity called Intestinal Pseudo-obstruction that has been described for patients with scleroderma. It's a chronic motility dysfunction attributed to the effect of the scleroderma on small bowel musculature. I dug a little deeper. Pneumatosis intestinalis has also been described in this clinical picture. The theory is that chronic stasis/dysmotility leads to build of of nitrogenous waste from intestinal bacteria that can track transmurally through the bowel. Well, that's all good and fine. But look at that image from the CT! And her bicarb on the BMP was 18. And she was tender. And..... I wasn't sure what the right move was. The literature suggests that bowel rest, NG decompression, and TPN invariably leads to resolution of symptoms. But, for whatever reason (arrogance, inexperience, anal rentive disorder), I didn't trust the data. The clinical picture was too troubling. So I took her to surgery. And I found nothing. Diffusely dilated bowel from Trietz to cecum; no transition points, no adhesions, nothing no suggest a mechanical obstruction. Moreover, the bowel looked perfectly pink and viable. No evidence of ischemia. By POD#2 the NG was out and she was tolerating clears. Went home the next day.

Humbling case. You learn to trust your instincts in surgery because so much of the diagnosis comes from recognizing signs and symptoms you've seen before. Peritonitis is universal. The history one sees with appendicitis is about as standard as a recipe. But everything was reversed in this case. I'd never seen it before. Not too many people have. But I had the clarifying information in front of me, and despite the medical literature, I did the opposite thing recommended. I certainly had an indication to operate but perhaps a cold, evidence based, algorithmic-programmed, decision making monkey would have made the better decision. The human factor always plays a role in medical care; usually it's to the benefit of the patient. In this case I would have been better off not looking at the CT, not examining her, not checking her labs. Then I might have been more likely to trust the literature.
Posted by Jeffrey Parks MD FACS at 3:18 PM

i don't think you did the wrong thing at all. clinical symptoms say operate then operate. if you don't and it turned out to be necessary, big problem, but as it turns out, she is happily at home. no (or little) harm done. the other way around and it would have been bad.