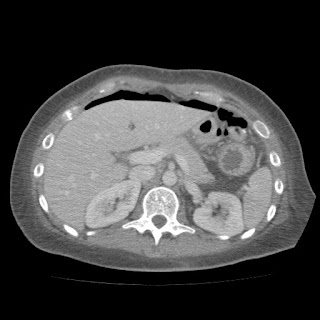 Over a 100,000 weight loss operations are performed in the United States every year. It is an operation that is the only proven solution to the complications of refractory morbid obesity, aka the "metabolic syndrome". There are many surgical options including lap bands, laparoscopic roux-enY gastric bypass, duodenal switch, and sleeve gastrectomy.

The most common one performed for morbid obesity is the Roux-en Y, usually performed laparoscopically. As everyone knows, this is a difficult operation and the learning curve is steep. In the wild west early days, the complication rates were astoundingly high. Leak rates of 8-20% were described. Patients died. It was a dangerous endeavor. Nowadays, as residents and fellows are learning the procedure from seasoned specialists, the morbidity of the operation is much more palatable.

But it's still a rather new operation, relatively speaking. Long term complications are still being delineated. I saw a young woman yesterday ER who had a Roux-en-Y done in Oregon exactly one year ago. She presented with an acute onset of severe abdominal pain and nausea. A CT scan suggested free air. I took her for emergent laparotomy and the perforation was at the anterior surface of the gastrojejunostomy. She had formed a "marginal ulcer" after the surgery which, over the subsequent months, ultimately eroded through the full thickness of the jejunal limb. Since the gastric pouch was already so small, I had to simply Graham patch the hole, as if it were a perforated duodenal bulb ulcer. I also placed a gastrostomy tube into the gastric remnant, in case she needs enteral feeding access in the future. Drains were placed in the upper abdomen and I got out. I didn't do it laparoscopically, but I think it was the right thing to do. Long term, she's going to need treatment with proton pump inhibitors and endoscopic surveillance of the ulcer. Stricture is a definite possibility in the future.

Even though most general surgeons do not actually perform weight loss surgery, it's important to be familiar with the anatomic alterations of all the bariatric variations. You never know when someone is going to turn up in your ER with free air.
Posted by Jeffrey Parks MD FACS at 10:02 AM

Interesting. I imagine the original surgery severed enough of the nerve supply to the remaining stomach that she didn't feel the ulcer until perforation? Scary.

Why would anyone get that surgery as opposed to a lap band?

I think that as time goes by ER doctors especially are going to be seeing a lot more complications from weight loss surgery (lap band as well as bypass). My husband had his 3 years ago, and the complications (and lack of follow-up studies) that have become obvious since then are just staggering. The link to the study on falling morbidity is actually the only one that I've seen- it's encouraging that people may be getting better at actually performing the surgery, but since it unfortunately only follows people one year out it doesn't take into account the severe malnutrition, protein, and sugar issues that many people are having now.

I think that as the surgery becomes more heavily marketed and popular, doctors are going to need to be familiar with the common complications post-surgery.

Lorilei- Interestingly, she has had chronic epigastric discomfort for a few months. I suspect this was a chronic marginal ulcer that progressed to a full thickness injury (not on PPI's)

Devorrah, in the short term, the risk of complication with the lap band is lower. However it appears that over time the rate of complications is actually higher with a lap band.

By leaving a foreign object in the body, the risk of infection actually rises the further out from surgery as opposed to with Roux-en-Y or similar surgery where the risk lessens.

Also, there have been problems reported with the lap band excoriating the outside surface of the stomach by rubbing against it causing massive bleeding.

ArkieRN: Thanks for explaining that to me, I appreciate it. My school secretary just lost 100 lbs. with the lap band, and I was wondering how the surgeries compare.

Absolutely incorrect: lap band cures diabetes as well and as rapidly as bypass. Also, the comment above about long-term complications over states the problem. Erosion was a problem early on. WIth newer bands and better techniques for installation, it's now very rare. WIthout doubt, if I were to have bariatric surgery, I'd have the band. The safety difference, and the nutritional consequences make it a no-brainer; to me, anyway.

Type 2 diabetes mellitus is about decreased insulin sensitivity leading to uncontrolled blood glucose level, whereas gastric bypass is about shortening the GI tract in order to decrease nutrient absorption [hopefully] leading to weight loss. There's no evidence in authoritative sources that suggests a correlation between the two, you see.

Health experts contend that weight loss surgery is a “major surgery.” One of the most common reasons why people would like to lose weight is to enhance their physical attributes. However, it should not be the underlying motivation that they should undergo the process of weight loss surgery. http://www.besthealthmed.com/weightloss.html

Apparently you are mistaken:
In the highest-quality study, excess body weight loss was 76% with Roux-en-Y gastric bypass versus 48% with laparoscopic adjustable gastric banding, and diabetes resolved in 78% versus 50% of cases, respectively.