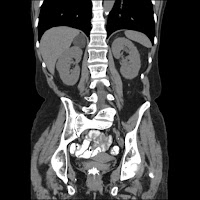 I love these cases. A patient was sent to me with an adrenal mass that had been increasing in size over the past 2 years. You can see it in the above image (hint: look above the right kidney). Adrenal masses over 6 cm (or even 5 cm in women) have a high likelihood of being malignant. But before you get them on the OR table you have to do some boring doctor-work first. Specifically, you have to make sure you aren't dealing with a functional adrenal adenoma. That means sending off a barage of blood/urine tests to rule out aldosteronoma, pheochromocytoma, or a cortisol-producing tumor.

The big one to worry about is a pheochromocytoma. Pheos produce catecholamines (adrenaline) and indentification of one prior to surgery is crucial. At least two weeks of pre-operative alpha blockade (a specific anti-hypertensive agent) is required to protect the patient from the surge of adrenalin release that can occur during the operative manipulation of the tumor, and also the sudden drop in systemic catecholamine levels once the tumor is removed.

This particular tumor ended up being a benign adenoma. The case hinges on identifying and controlling the adrenal vein. The little bastard is about two centimeters long and it enters directly into the cava. If it tears you end up with torrential bleeding. Which sucks. Until you get clips on the vein, snip it, and watch the bulging blue vena cava gently roll away from the gland it's a very high tension environment. I keep the music down and, believe it or not, I can get a little snippy and high maintenance. Sliding my Maryland dissector under the vein, then slowly spreading to break up the adventia, watching it flatten and whiten and elongate, stretching out away from Big Blue, nearing its maximal tensile strength.... shit, I'm getting beads of forehead sweat just thinking about it. But once it's controlled, it's time to blast the Playing in the Band and have a good time. All that's left is to hack the gland out of the retroperitoneal fat with my harmonic scalpel. For Academic Endocrine Surgeons, the hacking out part is probably a bothersome distraction, best left to the fourth year resident who, heretofore, had been assigned to camera-holding duty. But I like it.
Posted by Jeffrey Parks MD FACS at 7:38 AM

friend recently did massive pheo. i asked him if when he spoke to the patient in icu the next day, did the patient say.

please don't get irritated at me. seeing that i'm not quite in the medical field, the thing that caught my fancy was the "harmonic scalpel" and i started pricing the suckers! who knew? you can get a USED Ethicon G300 ESU for a mere $8500. Or an Ultracision for $1250, again, USED. Ethicon G100s go for between $1100 and $3300. In the mood for a NEW surgical instrument? The disposables go for $185. Dare I ask what you used? (Thanks for putting up with this silliness)

It looks like an adenoma on the CT, and it looks smaller than 6 cm. Why did you take it out?

If its density on unenhanced imaging didn't totally let you declare it to be a benign adenoma (i.e., if it were lipid-poor), why not go on to a washout study to characterize its enhancement pattern or do in- and out-of-phase MR imaging to look for microscopic fat?

If something is totally characteristic on imaging of something benign like an adenoma or myelolipoma, would the size criteria still apply?

Anon-
The threshold for operating on an adrenal mass varies, depending on what you read in the literature. The 6cm number is more useful as predictor of malignancy, but the consensus in the surgical literature is that masses 4-6 cm ought to be considered for surgical extirpation. In this case, the mass had increased in size 1cm over a 12 month period. With a rapidly growing adrenal mass, are you comfortable watching it, based solely on out of phase MRI findings? The patient's desires play a role as well, as you know.