One of my long time patients came to see me a while back with a complaint of abdominal distention, pain, and early satiety. A few years prior to this visit I had taken care of him during a prolonged bout of severe necrotizing gallstone pancreatitis. The scan above shows a giant pancreatic pseudocyst. A pseudocyst lacks a true epitheliazed wall. After an episode of severe pancreatitis involving parenchymal destruction and damage to branches of the pancreatic duct, pancreatic juices leak out into the surrounding retroperitoneal tissues. Once the flow of pancreatic secretions is tamponaded off (the ultimate size of the cyst is a function of the degree of ductal damage or obstruction) it will organize itself into a discrete cystic collection. Symptoms generally arise due to the mass effect of the cyst. Pseudocysts can also become superinfected leading to sepsis. Pseudocyst rupture is another rare complication.

We usually adopt a stance of watchful waiting with regards to pancreatic pseudocysts. Most will spontaneously regress as the duct/parenchymal injuries heal. Those cysts that persist past 6-12 months are unlikely to ever go away. Furthermore, cyst size is predictive of regression--- those greater than 6cm are less likely spontaneously resolve.

This cyst was over 20 cm. I watched it for a while but it never got smaller and his symptoms persisted. Treatment options include endoscopic vs. percutaneous vs. surgical decompression. Percutaneous drains are generally a poor choice because you simply convert a contained internal pancreatic fistula into an uncontained external fistula with all the attendant fluid/electrolyte sequelae. Endoscopic drainage of pseudocysts into the stomach utilizing endoscopic ultrasonography is an exciting new option but it isn't universally available and long term results are lacking.

The standard treatment has long been surgical decompression of the cyst into either the stomach or small intestine. I performed a cystogastrostomy on this patient. It's a nifty little procedure. By the time you operate the cyst wall has densely adhered to the posterior wall of the stomach. So all you do is open up the stomach anteriorly, palpate the bulging cyst through the posterior wall and excise a wedge of the gastric/pseudocyst confluence. Classic teaching is to send off that specimen to the path lab to rule out a neoplastic process. The image below represents the 3 month follow-up appearance of the upper abdomen. 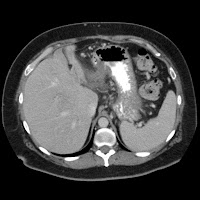 Posted by Jeffrey Parks MD FACS at 8:58 AM

endoscopic drainage sucks, as the gastro guys usually make a small hole, which usually clogs with debris from the cyst and u end up at square 1.

As a survivor of severe acute gallstone necrotizing pancreatitis with all of the typical complications, I found this very interesting. Good luck to your patient.

Nice Case!!
But you left out the part where it's George W. Bush's fault.
Oh, I'm sorry I mean Lebron James.
But don't worry, I'm sure the Cavs will have a decent team about the time they figure out how to make SUVs get 60mpg.
I mean by the time the Big 10(11? 12?)wins a BCS..
Don't really keep up with the minor leagues, but how's Ohio State lookin this year? Lets see, last time I checked ya got Tressel turning a blind eye, I mean callin the plays and TP runnin em'...

Nice case, one I'm jealous of! Good outcomes, happy patients. that is what makes our jobs fun and worthwhile.

I wonder why did you choose a cystogastrostomy instead of a cystojejunostomy? I'm sure you had your reasons, but I just like to know why have you opted to drain it in the stomach? Proximity maybe? Isn't the hemorrhagic risk greater in this case?

My friend has a pancreatic pseudocyst and recently (2 weeks ago) had it drained during an endoscopic ultrasound - doctor told him that it was about 70% drained. Pathology report came back saying the cyst is nonmalignant, and the doctor recommended that it be drained again in approximately 6 months. Good thing - the doctor told my friend it was caused by alcohol abuse. Bad thing - my friend does not care.

No response needed - just sad that so much can so so wrong and my friend truly doesn't care, doesn't eat - is slowly suiciding in front of his friends who care.

My daughter has a large pseudocyst following acute necrolizing pancreatitis which they are currently draining percutaneously. I'm concerned about the plan. Anything I should be asking about?

i had a severe pancretitis n was in hospital for 4 month. after dat i hd a major surgery n i am visiting hospital regularly.from last few week i feel bit pain n doctor did MRI n he found ancreatic pseudocysts of 4 cm.Can any one advise me what will happen now?

I had necrotizing pancreatitis in April 2008, 2 weeks after delivering a 2 pound preemie baby at 32 weeks. I developed 3 psuedocyst, I was hospitalized for 29 days I was released because my daughter was released. I ha a feeding tube for 3 months, I lost 52 pounds in 3 months, all of my hair fell out the same week got my gallbladder out which was august 2008. Now almost 5 years later my 2 small psuedocst 8cm and 7cm they each dissolved. When my gallstone passed it wiped out my pancreas I have a piece of the tail left which is wher my largest psuedocyst is still hanging out it has came down from 15cm to 6 by 8 cm. My Gi doctor did the watchful waiting thing and did mrcp and monitored, now he has moved away my new surgeon says I have a decision to make he wants to surgically drain my cyst. He says it can't be done laprascopic or endocscoptic. I have splenic vein thrombosis now and he is concerned about a variceal bleed. I got to go see my surgeon nov 12th I am suppose to be soul searching, he says if I were his kid he'd say take it out, I'm a single mom and scared that something will go wrong and I have a little girl to raise. In 3 years my cyst has held at it's current size while the other two took two years to shrink and disaappear. I don't know what to do. He said it was like choosing to swim with the sharks in the deep blue sea,no real clear choice. I get full when I eat, I have pain sometimes, I get nauseous at smells of certain things, I vomit when I have these episodes. Point me in the right way. If I have this done my surgeon is Dr.Nickel at UK hospital in Kentucky. I am 27 and my name is Jessyca Jones my email is fabfaces2011@hotmail.com if the BuckEye surgeon could email me...

Why the silence buckeye surgeon? Pancretic pseudocyst drainage concerns me as I have a pseudocyst post pancreatic open surgery for removal of multiple pseudocysts. This new cyst was drained endoscopically a year ago. Due for an MRI. So more info would be appreciated.
Watchful waiting is scary...