Recently the staid, establishment surgical journal, Annals of Surgery, attracted some undesirable attention regarding a Presidential Address to the European Surgical Society they published in last month's issue.  The transcribed speech---- "Modern Surgeon: Still a Master of His Trade or Just an OPerator of Medical Equipment? ---by Polish surgeon Marek Krawczyk MD was roundly vilified on Twitter and elsewhere for the alleged crime of only using male pronouns when referring to surgeons.

Following the backlash, Annals took the extraordinary step of retracting the entire piece.  Their statement on the retraction is below: 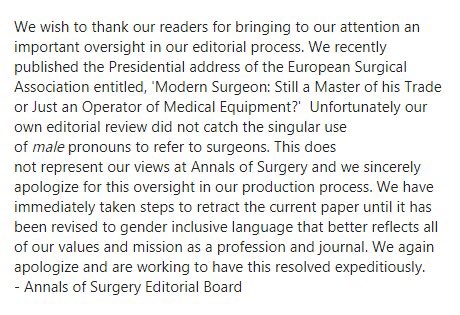 In an era of expected gender equality and, furthermore, in a medical field (surgery) where women are increasingly closing the disparity gap (for the past 5 years, women have represented 40% of all general surgery residents) the idea that such an august surgical publication would perpetuate gender stereotypes is certainly unacceptable.  But a deeper dive into this episode raises some questions.

The speech by Dr Krawczyk was a rather lumbering, anodyne review of the relationship between surgical excellence and evolving technology, i.e. can a surgeon be truly great or is greatness contingent on having the right tool at the right time.  He does a pretty standard historical overview of surgical innovation, from the Napoleanic Wars through the era of transplantation and robotics.  His conclusion is what you expect: the truly great surgeons would have been great in any era.  Cue applause at dimly lit hotel conference room in Bucharest.

The j'accuse of the matter is that Dr Krawczyk uses exclusively male pronouns when referring to surgeons in general (i.e. no one can get angry if "he" is used in reference to Dr Starzl or Dr Buchler).  I don't want to get into the minutiae of "micro-aggressions" or the "violence of discourse" but we can all certainly agree that using "he" or "him" every time to refer to "surgeon in general" is belittling and crude, especially when potentially half the audience identifies with the other gender.  It trivializes and diminishes the actual role that women play in modern surgery.

So does Dr Krawczyk actually do this?

Well, for starters, the title of the piece is absolutely garbage.  How that slipped by the editors of Annals is head scratching.  Simply substituting one word would render much of the controversy moot.  How does this sound:  "Modern Surgeon: Master of the Trade or Just an Operator of Medical Equipment".  Better?  Less demeaning?  More inclusive?

How about the body of the piece?  In how many instances does Dr Krawczyk flout acceptable pronoun norms?  To find out I went through the speech and counted.  (I'm a ridiculous OCD bastard when it comes to things like this.)  And I found 5 pretty clear cut instances when "him" or "he" is used to refer to a non-specific surgeon.  I also found 22 instances when he uses a term like "surgeon" (i.e. "surgeon's errors" or "assessment of surgeon performance" or "when a surgeon uses laparoscopy") instead of using "him" or "he".  He even uses the unwieldy "his or her" one time!  I mean, if Dr Krawczyk really wanted to be a cartoonish incarnation of misogyny he could have done so in a far more ostentatious and obnoxious manner.

Further, Dr Krawczyk, in a response to Annals editor Dr Keith Lillemoe, averred that he meant no gender offense, that in Polish, the pronoun he used is gender neutral and can refer to men and women.  Apparently this was not good enough for Dr Lillemoe and, in a statement to RetractionWatch, he said:

In Polish, ‘his’ is not a gender specific term, but it is in this country, and we wanted to make it right….We didn’t want to make the suggestion that we were not sensitive to gender issues, so we wanted to jump on it quickly.

Well ok.  And jump on it, they did, retracting the piece 3 days after initial publication. That's fine I guess.  But I sort of feel bad for Dr Krawczyk.  His transgression, such as it was, seems to have been amplified by the translation process.  Retraction is one of the worst things that can happen to a scientist or researcher.  The stigma attached to having had a paper or piece retracted by a reputable medical or scientific journal can pollute a hard earned reputation and compromise future attempts to get papers published.

And so now Dr Kramczyk is known by those in the international surgical community with cursory knowledge of the whole affair as that Euro-surgeon who had an article retracted from Annals because of "gender insensitivity".  It doesn't seem fair.  Is he a misogynist?  Or just syntactically challenged?  Or perhaps neither?

Instead of going straight to DEFCON 2 and retracting the piece, perhaps the editorial staff of Annals could have simply taken down the on-line version for the 47 minutes or so that it would have taken to clean up the title and switched out a couple of the "he" and "hims" for "a surgeon" or "his/her" and then posted an explanation for why it was altered.  I don't know, that's just me.