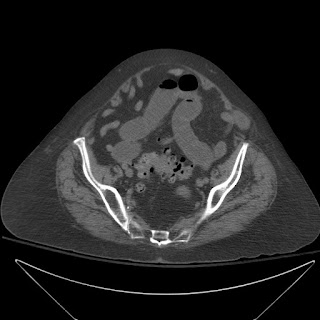 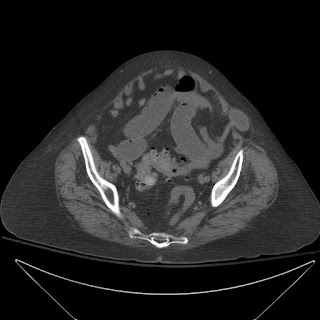 Cool case. This was a 87 year old lady who came in with an acute onset of abdominal pain, nausea and vomiting. Her history included HTN, remote breast cancer, and the ubiquitous hyperlipidemia. Surgical history included mastectomy, laparoscopic ovarian something or other, and an umbilical hernia repair with mesh. She seemed uncomfortable, had been languishing in the ED for several hours, and there was a kidney basin at bedside full of green bile. Exam demonstrated distention, tympany and a tender mass in the left lower quadrant. CT of the abdomen and pelvis (see above)suggested incarcerated spigelian hernia.

I chose to fix this daddy laparoscopically. Upon insufflating the abdomen and tilting her right side down, the incarcerated segment of small bowel spontaneously reduced. Of course I examined it. Although beefy red and edematous, stigmata of ischemia or perforation were absent. No reason for bowel resection. The defect was 3x3 cm. For hernia repairs with mesh, I always get nervous when incarcerated bowel is involved. Although not technically a "dirty" field, I worry about translocation of bacteria anytime you have engorged, obstructed, potentially ischemic bowel in area where I'm about to place a permanent foreign body. So I fixed the defect with Alloderm (acellular dermal matrix) using four full thickness abdominal wall sutures and reinforced with circumferential ProTacking. Very satisfying.

Spigelian hernias are somewhat unusual, although case reports have started to pour in over the years (almost certainly secondary to the widespread use CT scans). Lateral to the rectus sheath, below the level of the umbilicus is the spigelian fascia. Defects in this layer are known as.......Spigelian hernias! Most of the time, the aponeurosis of the external oblique is intact, thereby often obscuring rapid clinical diagnosis. Laparoscopic repairs have been done, even in acute cases of incarceration. But I believe this is the first reported case of repair with Alloderm. We will now pause for the self congratulatory applause to die down....

The lady went home in two days. I'll try to get the intra-op photos published as soon as I figure out how the hell to do it.
Posted by Jeffrey Parks MD FACS at 3:06 PM

Nice. I've had a few of those puppies over the years. I think you were wise in not using permanent mesh under the circumstances. What's the long-term failure (recurrence) rate with alloderm, compared to Marlex? I never used it -- not because I chose not to; just because I didn't really hear of it until very recently.

Not a lot of long term studies out there. Preliminary data suggest a higher recurrence rate with the Alloderm compared to Surgisis (a porcine small intestinal submucosa concoction) but my hospital contracts with the former. It's a tough call, trying to balance the risk of long term recurrence versus an infected mesh in the immediate perioperative period. I think you can live with the recurrence, especially in these little old ladies in their eighties who present with contaminated operative fields.