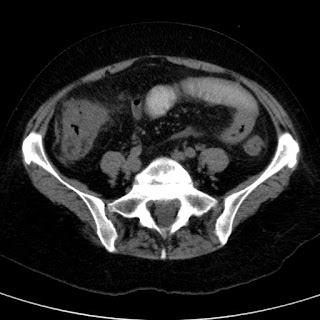 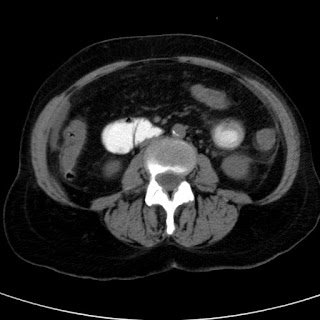 Unfortunate case yesterday. I was called emergently to see 50 year old lady in the ER who presented with 24 hours of severe unrelenting abdominal pain. When I arrived she was intubated and hypotensive. They had her in some crazy trendelenburg position (why do people still do this? arterial flow isn't facilitated by gravity. You just impede venous return to the heart.) Most of the history was obtained from terrified family members. My partner had operated on her a month ago for breast cancer. He'd done a lumpectomy and axillary dissection for a T2N0 poorly differentiated, Her2Neu positive, ER/PR positive ductal carcinoma. Nine days prior, she had received her first cycle of Taxane/Carboplatin based adjuvant chemotherapy. Over the past four days she'd suffered from horrible diarrhea, with abdominal pain coming on suddenly over the past 12 hours. Her skin was mottled and dusky and her heart rate was 140. Blood pressure was barely registering. Resuscitation with IV fluids was ongoing and the ER attending had already started multiple pressors. Her exam was unrewarding, as she was still completely zonked from the intubation meds. CT scan had been done prior to her crashing. (By the way, she'd been in the ER 8 hours prior to her decompensation.) The pictures were suggestive of diffuse enterocolitis. I was especially concerned about the cecum, which looked abnormally thickened with questionable pneumatosis. Her WBC count came back <1,000. Basically, I told the family that severe neutropenic enterocolitis carries a grim prognosis. Surgical intervention might potentially be life saving, but it could just as well hasten her demise. Without surgery she most certainly wasn't going to survive the night. She had three daughters, all in their twenties, and they wanted everything done. So I explored her; the cecum and part of the ascending colon were frankly gangrenous but the rest of the bowel looked pink and viable (although thickened and beefy red in some places.) So I did a right hemicolectomy, end ileostomy and transverse colon mucous fistula. She's still critically ill, as one would imagine. I'd give her about a 10-20% chance of meaningful recovery. Without white cells, the body just doesn't do well.
Posted by Jeffrey Parks MD FACS at 9:34 AM

Hope she beats the odds. Never saw this in my surgery training, though did see some chemo-skin stuff in my plastics residency. Is it increasing as the medical community gets more aggressive with chemo?

I've seen incidence reports of anywhere from 5-40% depending the chemo agents used. Overall, though, the data on the subject is pretty sparse. We started her on Neupogen (granulocyte stimulating factor) today, so hopefully it can rev up her bone marrow.

t2n0? sounds a bit dramatic to kill her with chemo. what happened to tamoxifen and co?

I guess because of the size (>2cm). I agree with the thought, though. Seems a shame to lose someone when the benefit of chemo may very well have been minimal.

According to the NCI, it seems appropriate for her to have received chemo-based adhuvant treatment.

adjuvant-online says it's about a NNT of 11 for chemo in T2N0 patients (relapse at 10yr).

Patient passed away last night. Her fingers and toes and subcutaneous tissues all turned blue throughtout the day. The stomas both looked fine. She just shut down. Terrible case.

So sorry for all involved.

What a shame:(. Patients are scared into thinking poison is medicine. I have seen this too much in my office. Very sad.