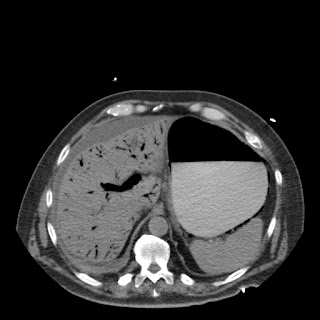 Horrible case Saturday night. A 65 year old dialysis patient with CAD/DM/HTN came in through the ER hypotensive following a dialysis treatment. He intitally complained of some abdominal pain with nausea. As the day progressed, the abdominal pain increased, becoming intolerable by the evening. I was consulted at that time and when I looked at the above CT, I knew it was game over. But the guy was totally coherent. We chatted about the Browns. He was making puns. Just a happy, regular guy. I said, listen, it doesn't look so good for you. He wanted me to do everything though; he had a new girlfriend and he wasn't ready to die yet. So I agreed. I took him for OR and I found gangrene of the the entire stomach, duodenum and 75% of the small bowel. The colon was compromised but not necrotic. I did a quick Mattox maneuver, just to see how bad the abdominal aortic branches were, and I couldn't feel anything in the SMA or celiac artery at their origins. The aorta itself was hard and stiff, like a bamboo shaft. He must have either tossed an embolus to both or had concommitant acute thrombosis. Basically an unsalvageable situation. I've never seen pneumatosis that involved mainly the stomach and duodenum like this. There are fewer organs in the body as well vascularized as the stomach. Ischemic gangrene of the gastroduodenal complex requires an extensive vascular compromise.

So I anticipate the inevitable "why the hell did you operate" question. Why would I operate on someone with CT scan that showed basically dead stomach and duodenum? It's not like I was going to be able to resect the third and fourth parts of the duodenum safely. Well, maybe I shouldn't have. He had no chance. But I propose two reasons:
1. The guy wasn't gorked out on a vent when I saw him. He was awake and coherent, even charming. He wanted everything done. We were giving him morphine every five minutes, significant doses. He was going to die no matter what and it was either going to be in that ICU room, conscious and in pain, or after a quick trip to the OR, sedated and intubated and unaware of the catastrophe ravaging his system. The latter seemed more humane to me.
2. Practice. Sounds ghastly, I know. But you don't get to do a Mattox maneuver very often. It was clear 30 seconds after opening the peritoneal cavity that I was just going to close. The Mattox added six or seven minutes to the case. Maybe some day a young trauma victim will roll into the ER with a belly full of blood and I'll have to do a similar vascular exposure to repair some injury to the SMA or Celiac. You could say I performed unnecessary, gruesome surgery on this guy; I prefer to think I was able to use the terminal event in the guy's life as a gift, in order to hone a skill that could someday save someone else's life.
Posted by Jeffrey Parks MD FACS at 10:44 AM

Dr. Buckeye, As a possible future patient with extraordinary medical problems, I am glad you went ahead with this operation even though the sad outcome was predictable. I am glad he didn't die in pain, and really glad that something was learned that might benefit future patients. So this is how medicine works. I am humbled.

Happy New Year to you!

Hi, I'm one of your readers who does not have a background in medicine. I enjoy your blog though I don't always understand the technical aspects. Often I google some terms. For pneumatosis I found a definition of gas in the bowel, but obviously that's not what you are referring to here.

What caused this man's stomach and small intestine to die? If it was related to the dialysis, how often does this complication occur?

Anon- The picture highlights the significant portal venous air and, if you look close, shows pneumatosis outlining the posterior aspect of the stomach.

the patient wanted you to give it a go. well done for doing what he requested. as you know, i recently posted on practice too, so i understand your 'other' reasons for operating.

fantastic reads about practice, buckeye surgeon and bongi. your taking time to write these experiences have helped me see things in a different and positive light and im sure will certainly be useful when i hit the wards in about 4 to 5 weeks time! :)

certainly worth submitting to Sterile Eye for the 12th Edition of SurgeXperiences.
http://sterileeye.com/2007/12/24/surgexperiences-112-call-for-submissions/