Prior to the early 1990's the standard of care for a woman diagnosed with Stage I or II breast cancer was to perform a modified radical mastectomy. That all changed with the publication of two major randomized controlled studies (National Cancer Institute in Milan,Italy and the NSABP B-06 in the USA) comparing mastectomy with the three headed attack plan of lumpectomy/axillary lymph node dissection/whole breast irradiation (Breast Conservation Therapy, or BCT). Ipsilateral recurrences were slightly higher with BCT but overall survival was shown to be equivalent between the two treatment methods, even out to twenty years.

This paved the way for the acceptance of the minimalist approach to breast cancer and gave women a viable alternative to the potentially disfiguring and psychologically disturbing option of mastectomy. Not only was BCT more cosmetically appealing, the accrued science had proven that it could stand confidently next to modified radical mastectomy as a legitmate standard of care in the treatment of breast cancer.

A recent problem has developed, however. We are finding that of the women who opt for BCT, 10-15% of them are not completing the recommended treatment cycle of whole breast irradiation. The most plausible reason for this is that radiation therapy is extremely inconvenient and time consuming. Most regimens mandate daily treatments over the course of 5-7 weeks. Imagine that for a moment. Every day, before work, you have to drive into the hospital and spend an hour in the radiation oncology department. For 6 weeks. Now imagine that the hospital is far away or your workplace is on the opposite side of town or you have to get your kids to day care by a certain time or maybe you're all alone and you don't get around as well as you used to.

Now certainly, these issues ought to be addressed by the surgeon performing the definitive operation. Inability to comply with the demands of radiation therapy is a valid counterindication to BCT. But the non-compliance issue has prompted a search for alternative strategies. Radiation is given to reduce recurrence rates to a level comparable to mastectomy. Omission of radiation doesn't necessarily worsen survival, but recurrence rates are unacceptably high without it. New data has suggested that 70% of recurrences after lumpectomy occur in the area of the resected tumor bed. Furthermore, the incidence of recurrence in other quadrants of the breast is equivalent when comparing BCT with or without post operative radiation. This raises the question: Can we simply irradiate the tumor bed and thusly achieve local control with longterm recurrence rates equal to the standard of whole breast irradiation.

Accelerated partial breast iradiation (APBI) can shorten the length of radiotherapy to five days and it comes in a couple of different flavors.
1. Interstitial Catheter-based Therapy: 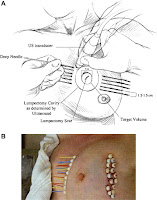 -This technique is highly user dependent and requires a technical expertise that has limited its applicability to a wider population.

2. Balloon-based Intracavitary Radiotherapy
-Examples of this include the Mammosite balloon
-A catheter is placed in the resultant lumpectomy cavity either at the time of the surgery or shortly thereafter (once margins and lymph node staus has been determined) and radiation is given via the balloon catheter twice a day over 5 days.
-Easier to learn and perform; better opportunity for widespread use
-Preliminary data suggests that locoregional control and recurrence rates comparable to whole breast irradiation.


What are the Exclusion Criteria for APBI/Mammosite?
-Primary tumor must be less than 3cm
-Cannot have positive lymph nodes
-Margins of lumpectomy specimen must be clean
-At least 7mm of skin spacing to avoid skin necrosis

Can you describe the process of Mammosite Balloon placement?
First, we determine suitability of the patient for APBI with Mammosite. (See above exclusion criteria) Then the definitive BCT surgery is performed (usually lumpectomy/sentinel node biopsy.) At the time of the intitial operation we leave the Cavity Evaluation Device (CED) in situ as we wait on final pathology and margins. The CED helps to hold and maintain the space for the actual Mammosite balloon. Once margins and pathology is clarified we exchange the CED for the Mammosite balloon either in the OR or in the office. An ultrasound probe is used to confirm placement and to check skin spacing and cavity conformity. Next, the radiation oncologist will often obtain a CT scan of breast to further elucidate targeting strategies and cavity conformity. If all goes well, the treatment commences shortly thereafter.

What is the bottom line?
At this point, although the preliminary evidence for APBI with the Mammosite Balloon is encouraging, we do not yet have definitive, level I evidence to support its use as standard therapy. At this point, it's still an experimental treatment modality that cannot be routinely recommended for all women with early stage breast cancer. The ongoing NSABP B39/RTOG 0413 trial is a randomized controlled trial comparing conventional whole breast irradition with APBI in patients with Stage 0,I,and II breast cancer. Results will be available in the year 2015. In the meantime, I cannot in good conscience recommend APBI until the level I evidence is there to support it.

Now there are scenarios where it may be appropriate. I will always recommend whole breast irradiation as the standard of care when discussing BCT, but I have had patients who research partial breast irradiation on their own and then ask me about its utility. These are patients who would likely fall into that 10-15% category of non-compliance anyway. They are adamant about not going through 6 weeks of treatment. And they don't want a mastectomy either. As long as we discuss the science behind the decision making and the risks of proceeding with a treatment regimen that is not currently the accepted standard of care, I will place Mammosite balloons on occasion.
Posted by Jeffrey Parks MD FACS at 11:23 AM

Med student here. Well, I would have been one, but I've had to defer for a year due to breast cancer. So I'm deep in it.

I'm not that moved by the 10-15% non-compliance in this study. All the women were over 66, the study watched '92 to '02, and the study says that it's mostly women who have mastectomies who are non-compliant. Um, which tumor bed is being irradiated in this case? Are these women at the end of many months of chemo before radiation starts, and if so, is it fair to have high expectations in cases where there's an absence of traditional structure (aka husband/job/car)? And, isn't sandwiching chemo-rad-chemo at least a partial answer?

I'd like to see what the similar compliance numbers are for chemo: how many walk away once the fatigue suckage hits, or when they can't work anymore, etc.

Remember, too, that since this is in trials, no insurance will be covering the costs. That can certainly be a limiting factor for many people.

By the way, drmidlife, are we looking at the same study? The prospective one written in 2005 that includes women >18yo?

DrB- Not true about the insurance. Granted, you need to talk to your insurer prior to starting, but partial breast irradiation is more often than not covered....

Really? Because the experience that I have had here in New York (granted, not mine, directly, but that of a good friend who is a surgical oncologist) has been no insurance coverage. I had that discussion with him this past April. Is it possible that things have changed since then, or that they are different here in NY?

drb: I was talking about the study on non-compliance in completing radiation, not the APBI et al. B.Surg linked to it on a Reuters site early in the post.