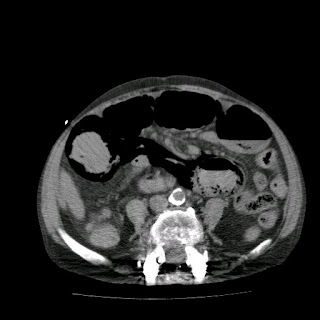 I was called to see this patient emergently for sudden abdominal pain. He was a 65 year old alcoholic, tall and thin and gaunt-faced. He drank a liter of Vodka a day, a refugee in our ER that day from the VA system. He had peritonitis on exam and his lab work was rather discouraging. Severe metabolic acidosis. White blood count over 25k. Creatinine 5.1 (new onset ARF). He was a mess. Buddy, we need to try to find out what's going on with an operation, I told him. Whatever doc, he said. Just get me some more pain medicine.

Look at those images above. That's a high grade bowel obstruction with extensive pneumatosis intestinalis and retroperitoneal air. You always think about perforated duodenal ulcers in alcoholics with retroperitoneal air but there was no free fluid and no evidence of peritoneal free air. Whatever. He needed an operation but I figured it was probably too late. That degree of pneumatosis is usually an ominous and end-stage sign

He'd never had an operation before and with his body habitus it was easy and fast opening him up. The proximal jejunum looked purple and the associated mesentery bubbled with the retroperitoneal air. The loops of bowel proximally were grossly dilated so I did what I always do when operating for a bowel obstruction. I found the cecum and marched my way backward toward the ligament of trietz. The ileum was pink and peristaltic and completely decompressed. As I approached the jejunum, I sort of got stuck. It seemed things were arranged weirdly. It seemed the jejunum had somehow flipped around on its vascular axis, kinking both the lumen and the blood supply. So I flopped the bowels around a couple times like a twisty tie and amazingly the jejunum started to "pink up". I spent a lot of time screwing around with an extensive duodenal dissection (take down ligament of trietz, Kocher maneuver etc) just to make sure there wasn't any frankly necrotic bowel. But it all looked fine. Dilated as hell and edematous. But viable. I didn't know what else to do, so I closed him up. Fortunately, he did quite well. The kidney failure resolved within a couple days. The acidosis resolved.....but he spent the next three weeks going through some serious DT's.

Small bowel volvulus is a rare cause of bowel obstruction. Here's a good review from the medical literature. I don't know why my patient suddenly volvulized his intestines. It wasn't a case of adult malrotation (which I've also seen)and it wasn't a sequelae of a primary cause, like adhesions from previous surgery or internal herniation. It just.... sort of....happened. Anyway, he's better now. I'm just lucky I detorsed the volvulus when I did; dead duodenum and proximal jejunum aren't compatible with any surgical cures.....
Posted by Jeffrey Parks MD FACS at 5:02 PM

Just an ER doc here -- I thought pneumomatosis was a sign of irreversible bowel death. Apparently not. Interesting case - thanks.

Good Case!! Fixed the guys twisted chittlins and detoxed him at no extra charge. Is that some calcium in his Aorta? He might want to get one of those Life-Scans down at the VA.

Very nice, Buckeye. Is he continuing to improve?

Shadow- You're right. Pneumatosis is generally a poor prognostic indicator. But there are situations where it's less worrisome (read about benign pneumatosis in patients with scleroderma).

not directly related to this case, but on the topic of being a bit lost in the abdomen. have you ever been involved in a case of ileo-sigmoied knot? it is a subdivision of the type of sigmoied volvulus that we get in our area, but quite disorientating when you open. also pretty fatal.

ileal sigmoid knot...never heard of it, so I looked it up. Lots of case studies in the literatute actually, most involving patients in Africa.

shadowfax--good thing that all you have to know how to do in your job is read the radiology report and call for a consult. medical knowledge is overrated anyway.

Anonymous said...
This comment has been removed by a blog administrator.
September 4, 2008 at 9:43 AM

buckeye, even here it is rare. i've only operated two ever.

Buckeye - what makes me nervous about a case like this is the likelihood of recurrence. I guess you hope that as things scar down, it won't re-volvulize?? Guess there's really nothing to pexy down anyway

Anon- I can't pex the entire small bowel. If it happens again, hopefully some surgeon gets him to the OR ASAP.

Very interesting case. We get to see some caecal and sigmoid volvulus here in India but only once have I seen a case of small bowel malrotation.
MOstly they occur in children. Good job you opened him up in time

I am a nursing student in my medsurg rotation and I don't understand something :)

What would cause this patient to have ascites??

I have a malrotation of the intestine. 38 year old male in Arizona.

Do you know of anyone that can help me?

I am in search of someone who has treated/done surgery on the problem. Most Docs. have heard of it but don't know how to treat it.

P.S. I apologize if this is not blog related but I need serious help with this problem.