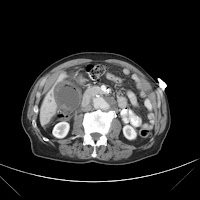 This isn't something we get to see every day. I saw an elderly gentlemen in the ER recently who complained of 24 hours of right sided abdominal pain. Other than a history of mild HTN, he was a pretty healthy old dude. No diabetes. Nothing in his history to suggest an immunocompromised state. He was certainly tender on exam, exquisitely and rather diffusely so. His WBC count came back over 30k and I was actually initially worried about ischemic bowel. But we sent him for a CT scan and the above image is the money shot.

What you see is a pathognomonic picture of emphysematous cholecystitis. (Notice the air in the wall of the gallbladder). This is a very severe form of acute cholecystitis where anaerobic bacteria, such as clostridial species, invade the gallbladder wall and produce gas. It's rather rare (only about 1% of cases of cholecystitis) but it can be lethal, carrying mortality rates of 15-25%.

Emphysematous cholecystitis depends on one or both of following: vascular compromise of the gallbladder and systemic immunosuppression. Anaerobic bacteria don't exactly thrive in tissues that are well oxygenated with good blood flow. Advanced cholecystitis, where the perfusion pressure of the capillaries is overcome by the edema of the inflammatory process, can lead to cystic artery occlusion and hence, a dead gallbag. Enter your anaerobic species, stage left. Immunocompromised patients (diabetics/transplant patients/HIV) are also susceptible to this virulent form of cholecystitis (for obvious reasons).

The treatment is surgical. Call the OR. Book the case. I took this one out laparoscopically, but sometimes you have to open because the wall of the gallbladder can often be about as sturdy as wet toilet paper (single-ply, like in bus terminal restrooms) and everything tears and spills and it's just a horrible mess.
Posted by Jeffrey Parks MD FACS at 12:23 AM

Nice film! Would have loved to have watched you do this surgery.

One of the first cases I scrubbed on was a Perf-ed Gall Bag...Black Dude about 97 years old, claimed he had coached Hank Aaron...was th e first time his innards had ever been exposed to Room Air...guy did fine, surprisingly no complications, and this was back when patients stayed for a few weeks even for an elective cholycystectomy...