The flip side of the coin 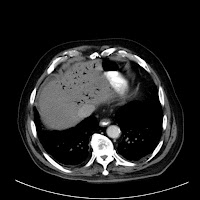 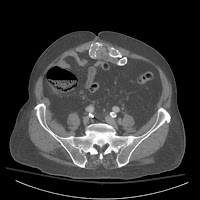 An old guy rolled into the ER with severe abdominal pain. He was hemodynamically stable but he looked like hell. He was sweating and pale and trying to joke around with his family sitting bedside, but it came off forced and hollow. He had peritonitis on exam. His WBC count was over 20k with an extreme left shift. His lactate was 4.8. The ER had already obtained the CT scan prior to my arrival. The images above show extensive hepatic portal venous gas and pneumotosis of the right colon. He needed an operation.

The appearance of portal venous gas is historically an ominous prognostic variable. Liebman et al's Annals of Surgery paper on the topic from 1978 quoted a 75% mortality rate. Recent literature studies suggest slightly better outcomes (40-80% mortality) but it's still not what you want to see on a CT scan. This guy was upper seventies, had a history of CAD and PVD and he had undergone an open AAA repair five years ago.

The surgery was a nightmare. It was 1 in the morning and it seemed the entire length of his small bowel was fused to his anterior abdominal wall. It took me almost an hour just to open up the length of the incision. There was no space in the peritoneal cavity. Everything was adherent and fused. It was as if someone poured a gallon of Elmer's glue over all his intestines and allowed it to congeal. The minutes kept ticking by. I could smell the gangrenous bowel, hidden somewhere in the depths of his distorted anatomy. But I couldn't see it. It was akin to efforts of a rescue squad trying to dig out survivors buried in the rubble following an earthquake. You go too fast and you can cause more damage. Conversely, allowing too much time to elapse similarly compromises your goals. It ended up being a three and a half hour case. The cecum was a marbled blackish green, and I did a quick right hemicolectomy with an end ileostomy/mucus fistula combo. In the family waiting room, I was very honest. I told the family that his chances were probably less than 50%. We would see how the next 48 hours went.

He got better. He went to a rehab center on post operative day #8. It worked out. He isn't going to die from an infarcted cecum. He gets to enjoy his family for at least another few months or even years.

And this is the flip side to the argument of limiting the amount of care we provide to patients who are either very old, very sick, or a combination of both. The story I wrote earlier this week about the man with stage IV pancreatic cancer is entirely different. No amount of medicine, no specific procedure exists that would alter his final outcome. But this case with the infarcted colon is much more equivocal. This guy survived. But we expended a great deal of resources to enable this to occur. He was in the ICU for four days. He was on a ventilator for 48 hours. We kept him on powerful, expensive broad spectrum antibiotics. I had him on parenteral nutrition for a few days. Multiple specialists followed him every day. Now he will have to be housed in a rehab facility for maybe a month or more. He will have to learn how to care for his ileostomy (not something he's too excited about). He certainly survived the catastrophic event. But will his life ever be the same?

So what do we do? We have the ability to truly save patients from insults that had previously killed human beings for thousands of years. How do we decide when it's justified to throw everything in our armamentarium against a disease afflicting a patient? If 50% of patients are going to die no matter what you do, is it still defensible to aggressively treat all of them?

Ultimately, I think, it becomes a very private and delicate conversation between doctor, patient, and family. That's all there is. It doesn't get much more complicated than that. But I think maybe that's the way it ought to be, the way it ought to remain. Delegating that decision to an algorithmic tree devised by some depersonalized entity (like MedPAC in D.C.) seems to be a betrayal of what it means to be a physician, a capitulation to expediency and economics....
Posted by Jeffrey Parks MD FACS at 10:55 AM

A familiar story, well told, with little to add. As one who has been there and done that more often than I care to remember, I must agree with your conclusion. I am perhaps a bit more hopeful, though, about the role of protocols and alogarithms as they become more prominent in clinical practice. They are not not a replacement for the responsibility of the decision making and patient counseling, but a tool to inform and validate the surgeons choice and therby shore up one's confidence and lighten the burden.

Hope you called Dr.Obama before spending the Tax Payers money so freely....
OK, I know you don't have to now, enjoy it while you can...
Wait'll they figure out all the Anesthetic Gases that end with "Ane" are destroying the Ozone...all we'll have left is good old Nitrous...That'll make your dead bowel operations fun...

P.S. you fooled me with your title... thought it was gonna be a case of Situs Inversus...

If ever decisions of medical allocation become nothing but clean-edged whole-numbered sums and products -- unadulterated "protocols and algorithms" -- well, obviously the soul of medicine would be in trouble.

It won't go that far -- and the formulas are needed to aid doctors and patients in advancing logical thought about a terribly human process, over which we like to think we have some control.

Why don't we talk about death with our doctors; Why don't doctors broach the topic? We don't even dare to compare our differing experiences of "quality" of life. (I think the degree of divergence in our notions of quality of life might be a real shocker!)

(Happy Bloomsday, by the way)