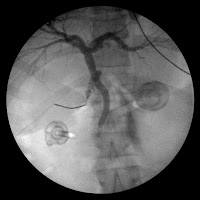 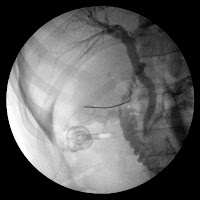 This case was sort of fun. The patient presented with abdominal pain, localized in the epigastrium and RUQ. The US demonstrated gallstones and a thickened gallbladder wall. His amylase and lipase values were extraordinarily elevated, suggesting an element of gallstone pancreatitis. Furthermore, his bilirubin and transaminases were abnormal, raising the possibility of a common duct stone. So I sent him for an MRCP which was rather unremarkable, other than showing some edema around the pancreas.

My policy on gallstone pancreatitis is to remove the gallbladder once the pancreatitis abates---on that same admission. That way there, you don't have to worry about relapse if they pass another stone while waiting to get their outpatient surgery done. So I took this guy to the OR and his gallbladder was predictably inflamed. My initial intra-operative cholangiogram (see top pic) demonstrated a meniscus sign in the distal duct and non-filling of the duodenum.

Usually this warrants a post-op ERCP to fish out the stone. But in this case, the patient's cystic duct was quite dilated (even the large clips wouldn't extend across the lumen; I had to secure it with an endoloop). So I decided to make a run at it myself. I slid a fogarty catheter through the stump and into the common duct, all the way into the duodenum. Then you inflate the ballooon and slowly bring the tip back, adjusting for tension as you go. So I did that and boomski, out popped a little yellow stone. The second pic shows a pristine biliary tree with the folds of the duodenum filling in like a coral imprint.
Posted by Jeffrey Parks MD FACS at 9:54 AM

I had a similar case recently. As for gallbladder removal at a patient with gallstone pancreatitis we do this most of the times for the same reasons as yours. I guess surgery is the same, no matter where you are.
I love this kind of pathology and intervention.

Niiiiice case. Looks like fun. Not fun when the daggone stone won't come out.

nice case -- how'd you take the stone out of the patient?

You ain't foolin nobody Buckeye, if that ain't Sara Palin's CBD, then my Schlongs not 14 inches long...
I know about Patient "Confidentiality" and everything, but she's a public figure, we have a right to know if she really fathered a Mongoloid, I mean, has a Gallbag.
How bout those Indians??? Seriously, why don't THEY move to Baltimore?

But NFL football starts in 5 weeks, so you've got the Browns...

Wanta put a little wager on the Miami/Ohio State game??? I won't even ask for points.

great case! What size fogarty did you use? Did you try Glucagon?

Anon-
I did use glucagon, although I doubt it ever really does anything. And I used a #4 Fogarty.

There are lot of measures for the removal of the stone these days.I prefer the laproscopy way which is painless practically and helps get back to work sooner.