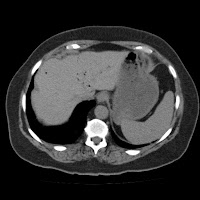 Most cases of cecal volvulus involve the twisting of a redundant, poorly fixated cecum around its ileocolic pedicle. Cecal bascule is a weird variant of cecal volvulus wherein its anterior wall folds over on itself oddly. I can't describe it in words very well. The first picture above may or may not be helpful.

Anyway, I operated on this lady recently who presented with portal venous gas and had peritoneal signs on exam. A deep fold in the anterior wall of the cecum delineated the extent of the gangrene present, isolated to the anterolateral aspect of the cecum. We did an ileocolectomy and she ended up doing well. Then I went home and looked up the word "bascule", because it sounded so stupid. Sure enough, I found it is a French word meaning "seesaw" or "balance". Drawbridges operate on a similar principle. My daughter loves seesaws. There's a park around the corner from where we live that has one. She makes me ride it with her for longer than I would normally enjoy. 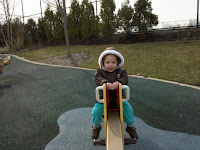 Posted by Jeffrey Parks MD FACS at 8:58 AM

Buckeye, your Yankee-ness is showing...
that ain't no "Seesaw", its a "TEETER TOTTER"
which still haunt my nightmares, y'see my older Cousin used to pull that trick where they get off while your ends up in the air, causing great pain and distress to the package area..
Yeah, she was pretty mean...

Ha! When you have kids, you do many things longer than you would normally enjoy, don't you?

About time you got back to business!

You need to stow your political rants
and talk medicine. Your politics are
boring. We've heard it all before.
You think you have a new political
perspective? Think again! Even
Atilla Gwandness is going on two
tours old!

Give me more realistic Medicine talk and not
political diatribes, or I'm gone!!!

Anon- All those advertisers and sponsors of my blog are SOOOOOOO happy to hear that they will not be losing your precious page views. I am forever grateful.

I enjoy the political rants and torture rants. I would also like rants on how the CDC's director for 8 years Dr. Julie Gerberding. She now heads up Merck as president of its $5 billion vaccine division. I have a feeling we will see new vaccines for fibromya to smoking cessation. Pictures of your daughter should increase viewership but you should stick to radio/internet. Buckeye you covered Palin and Trig. Maybe you should cover Obama's birth certificate. I can easily produce my birth certificate.
TB

Oh she is so cute!