The liberal blogger Matthew Yglesias' take on the Steven Brill's health care crisis tome is a strange one.  Rather than focus on Brill's substantive points about the medical-industrial complex, he elects to point out the one facet of health care spending that Brill downplays; i.e. doctor compensation.  Yglesias, from the Gawandean school of Avaricious Physicians, apparently, feels that we need to crack down even harder on physician reimbursements.  After all, doctors in the United States earn more than doctors anywhere else in the world.  To back such a claim he cites this chart from the OECD: 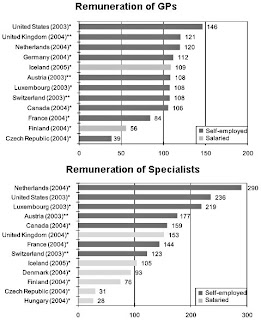 Put aside such mitigating factors as medical school costs in the United States compared to other countries.  Ignore cost of living considerations in the world's wealthiest nation.  Put aside the obvious correlative between being the richest nation in the world and having professionals who correspondingly earn more than counterparts in less wealthy nations.  His cited evidence is simply shoddy.  When measured in the context of the ratio to relative wage per country, the average general practitioner in the United States is remunerated no differently than practitioners in other westernized countries like Germany, the Netherlands, Iceland, and the UK.  Furthermore, although GP wages have been on the upswing in countries with more socialized medical subsidization schemes, in the United States the story is the opposite:
﻿

In several countries, the growth of GP remuneration has been relatively modest. In Canada, the remuneration level of GPs in real terms grew by about 5% between 1997 and 2004. In Austria and the United States, the average remuneration of GPs in real termdeclined by around 5% between the mid-1990s and 2003.6 In Austria, the decline in average remuneration may be due at least partly to a change in the proportion of part-time practitioners during that period (since the data include both part-time and full-time GPs). In the United States, the decline of GP incomes in real terms was driven mainly by a reduction (in real terms) of fee levels paid by Medicare and private insurance (Center for Studying Health System Change, 2006).

Again, this is all from the same OECD report that Yglesias initially used to argue for more Draconian cuts in physician compensation.

It's a dreadfully incomplete, sloppy piece of reasoning from a guy who's usually pretty sharp.
Posted by Jeffrey Parks MD FACS at 4:04 PM

Unfortunately, Krugman has fallen into similar traps. Medicaid is cheaper than private insurance? No shit, but is it really a model for the rest of the country?
http://krugman.blogs.nytimes.com/2013/03/03/government-and-medical-costs-continued/

Then again, it's hard to expect substantive healthcare analysis from macroeconomics bloggers.

Some more recent data would also be nice. Since 2004, specialist income of self-employed specialists in the Netherlands has declined by somewhere about 20-30%, and salaried specialists (not shown in the chart) were already earning about 30-40% less than the self-employed ones.

and then the next day Yglesias posts on his unsatisfactory visit to a Kohls department store. What does this guy really know about healthcare and/or its delivery anyway?

We should have an independent board (akin to the SEC except not corrupt) of physicians that will make the hard decisions (tort reform, make patients have some skin in the game, end of life issues, etc) necessary to reform our healthcare system. Its obvious our stagnant legislative or executive branches won't do it.

How about physician productivity and work hours in the US? Did Yglesias account for that? I see no evidence that he did.