Def: a form of traumatic brain injury that occurs on the opposite side of the head from which the impact occurred. 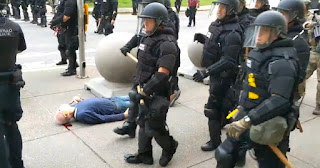 The old man approached gamely
But they jacked him backward,
Awkward stumble, skull cracked
Against urban gray cement.
He lay supine motionless
As black booted cops
High stepped over his fallen
Form in helmeted nonchalance
As blood seeped into the streets
And now we’re in the streets
Holding signs, chanting
Kneeling in pious rage
While American blood seeps
Into our scraped knees,
Breaking windows, breaking chains.
The brain floats in fluid,
Suspended untethered, glides
Like the bubble in a tilted level
The more you know the position
The less certain you are of its speed
Of change, which can be measured
But once you look down it’s gone.
You roll your eyes,
Chalk it up to signaling virtue
But you had the first whack
And by the logic of the contrecoup
The decent and the good will gather
And momentum always strikes back.

Email ThisBlogThis!Share to TwitterShare to FacebookShare to Pinterest
Labels: poetry