Further Tales from the Nonagenarian Archives 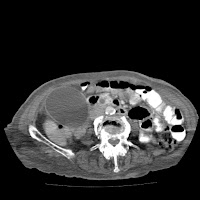 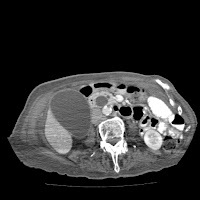 I was asked to see this fiesty, demented 90 year old lady (yeah, it just seems that my patient population is all the nonegenarian and octogenarian people of Northeast Ohio) recently who had been transferred from a nursing home complaining of abdominal pain and nausea. She was also found to be frankly jaundiced. The scans above demonstrate a grossly distended gallbladder and an extrememly dilated biliary ductal system. About three months prior to this admission she had been hospitalized for very similar complaints. An ultrasound at that time confirmed gallstones but she apparently improved spontaneously and was just transferred back to the nursing facility. Here she was again.

GI had been seeing her and they had attempted an ERCP but were unable to cannulate the common bile duct. Presumably the obstructive jaundice was from a gallstone, but you couldn't rule out a stricture or a cancer. Enter Dr. Buckeye.

When I walked in her room, the first thing she said was "who the hell are you", in this thick, eastern european accent. She seemed pretty sharp though. She sat upright in bed, meticulously feeding herself some soupy hospital-issue scrambled eggs (yeah, not sure why she was on a regular diet). Her eyes were vigilant and focused, darting right and left; not that dull, faraway, hazed look you see in a lot of elderly demented nursing home patients. She moved purposefully and exuded a certain vivaciousness. She was functionally demented, I guess is the best way to put it. I listened to her ramble on a bit, some in English, some in Hungarian, and then I began to examine her. She was extraordinarily tender over her right upper quadrant. I gently brushed the eggs from her chin. "Don't do that!" she shouted at me, as I pushed on her belly again.

Let me give you a little historical background on this woman (as per her power of attorney, take it as you will). She was born in Hungary in 1919. Half her family was killed during WWI and the other half during WWII. After the Soviet invasion, her husband was murdered while she was 5 months pregnant. She subsequently miscarried and lived in abject poverty for a few years. She somehow came to the United States alone in the late fifties and lived with friends, surrounding herself with other Hungarian immigrants. She never remarried. She worked as a seamstress for thirty years. She had no living family in this country. All her friends had died off or drifted away. She was the ward of an unrelated local lawyer who was her power of attorney. This gentlemen made all her medical decisions and managed her affairs. I called him and gave him the unvarnished version of the situation. Ms T has a problem with her gallbladder, maybe worse. There aren't a lot of good options, I told him. We could put a tube in her gallbladder for decompression, to see if that made her feel better, but it likely wouldn't do anything about her jaundice. We could do nothing, send her back to the nursing home on antibiotics. Or we could subject her to an operation, removed her gallbladder and try to decompress her bile duct.

He called me back the next day. He had no personal attachment to Ms T but he didn't want her to suffer unnecessarily. Apparently, she had been complaining of these abdominal pains on and off for months. He didn't want her to go through the rest of her life like that. In all honesty, he didn't know what to decide. How could there be a "right course of action" in this sort of scenario? It was all on me. He would do whatever I suggested.

So what would you do? I guess if we had an actual National Death Panel (NDP), my job would be a lot less stressful and morally ambiguous.

But being who I am, I put her on the OR schedule. I just had a feeling it was the right option. Isn't that terrible? That I based it on a hunch? It was her eyes, those dark slits darting to and fro, simmering with some sort of life force. I had a feeling she would pull through. It sounds hokey, I know. But that was the main reason. Anyway, the surgery went fine. She was thin and her anatomy was textbook. I did an open cholecystectomy, extracted some stones from her bile duct and put in a T-tube. She went back to the nursing home on day 6. That last morning when I made rounds, she looked up at me as she ate, a look of irritation that someone was interrupting her breakfast. "Who the hell are you", she asked.....
Posted by Jeffrey Parks MD FACS at 12:30 PM

lq2m. Yes, in these cases it would be easier to have someone else who was responsible for the decisions made, but we're the ones in the trenches looking into those "eyes"

I think that it was the right thing to do; to do a simple operation to relieve her pain. If it had gone pear shaped then she wouldn't be one who should have heroic measures. But I suppose that is just what I would want if I was in her position.

That would be my test; if she was your relative, would you hope that someone would do the same for her?

Isn't it terrific that this 90yro lady, who lost half her family in "WWI" and the other in "WWII", now has many years left to good ole' Buckeye. Let's hope she gets her memory back.

Back to work now for me, so I can pay for my family's insurance, and also all the other emigres retirement healthcare.

p.s. If I ever request life saving surgery when I'm 90, shoot me.

Adrian:
He maybe an asshole but he brings up a very valid point. Is it the right thing to do? Where is the line drawn? Does she have quality of life now? Unrelated, I've seen hundreds of thousands spent on aggressive tx that even when though go well, eventually go bad due to lack of outpatient followup. My point is that if we are to ever have real sustainable healthcare some very difficult decisions will need to be made as to aggressiveness of care in the elderly.....or not and the system will be bankupt screwing everyone.
Ps: none of this is meant to impinge on buckeye's decision.

Call me when you're 89 and we'll see how you feel.

It's amazing to me how much we can learn about different patients and what their stories are and why they might act they way they do. If only those patients did the same thing for medical professionals, doctors and nurses alike, it might make the job more enjoyable.

good call. right call. sometimes the proof of the pudding is in the eating thereof.

Takes some good DNA to survive 2 World Wars and living in Cleveland...talk to me about triage when they stop doing elective hernia repairs on death row inmates...
Just Curious, not about the Surgery, but the Anesthetic technique, did they...Oh, forget it, Sux, Pent, Tube, Gas, Reverse..

Seriously, had she had prior abdominal procedures or were you the first to penetrate her peritoneum since God shrink wrapped it shut in 1919...

Ha! You have to love the feisty Eastern Europeans. I personally don't think that operating based on a hunch is a bad thing at all. Have you read Atul Gawande's "Complications?"