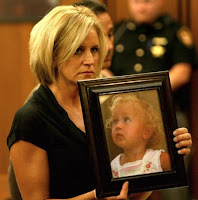 From MedCity News, the Cleveland area pharmacist who pleaded no contest to a charge of involuntary homicide in April in the death of 2 year old Emily Jerry (after carelessly approving a deadly saline solution mixed by his lab tech), has been sentenced to 6 months in the county clink.

I wrote about this case a couple of months ago. I'm still troubled by the idea of cases like this setting a precedent for the criminalization of medical malpractice. Eric Cropp was a bad pharmacist. He did a lousy job supervising his staff. He'll never work as a pharmacist again. But it seems that the circumstances surrounding the death of Emily Jerry suggest more of a systemic deficiency (lack of adequate oversight, unclear credentialing for lab techs, absence of multiple levels of scrutiny, etc.) than a true instance of malicious, criminal conduct by a single man. You wonder if the age of the victim and all the attendant emotional turmoil that the death of a child can incense had as much to do with the decision of the prosecutor to proceed with a criminal trial as the act of negligence itself.
Posted by Jeffrey Parks MD FACS at 5:56 PM

buckeye, I have to disagree. the guy's actions killed someone and the fact that it was also malpractice is really unrelated.

we're not criminalizing malpractice in this instance, we're punishing poor judgment that results in injury/death.

so the guy was at work when he killed someone and so his work happens to be in the medical field. it's irrelevant.

what if this guy was a contractor who liked to throw his tools off the roof into the back of his pickup instead of carrying them down the ladder. one day he hits a 2 year old in the head who dies.

both cases are manslaughter. no difference in my mind.

Note that the charge is "involuntary" manslaughter. This doesn't require a showing of actual malice or intent, simply a reckless indifference or gross negligence. That accounts for the 6 month sentence as opposed to a 6 year sentence. Prior comment (radinc) is right on the mark here.

I think it's great that he has been stripped of his license and will never be a pharmacist again. It really does sound like he didn't care about doing his job. While I agree with you that it's scary for the prosecutor to arbitrarily make this go from civil to criminal...the jail time doesn't reverse a thing. Emily's Law is the only good thing to come from this.

I see what you guys are saying. But it just seems that when the presence or absence of malice doesn't necessarily determine whether professional negligence will be tried as a civil tort or a criminal case....it makes me a little wary.

Consider:
Surgeon X leaves a lap pad in the belly after a colon resection. The final count wasn't documented properly. During the re-lap to retrieve the pad, the patient suffers a peri-op MI and dies.

Internist Y instructs his nurse practitioner to write an antibiotic script for a patient. NP chooses a med that the patient is allergic to; patient dies from anaphylactic shock.

ER doc sees a kid with two weeks of belly pain following a hard hit during football practice. Everything checks out normal. Doesn't get a CT scan. Sends kid home. Kid actually has a slowly increasing traumatic splenic capsular hematoma that ruptures that night at home and the kid dies.

How are any of these scenarios different than the Eric Cropp case. Based on the Cropp precedent, why couldn't a prosecutor bring a criminal suit against them as well?

Well, with the surgeon example, was it the doctor's fault for the count being wrong? No idea how that works, actually. Isn't the M/I risk there for every surgery? What was the risk of leaving the item vs. retrieving it? Sad example.

With the internist, was it an antibiotic the patient never had before? Or was it one they were allergic to and they took it anyhow? If you never had it before, how is it anybody's FAULT if you were allergic? If you're allergic to any antiB's I think you need to be extra careful and discuss a new one (I am allergic so that is just my feeling).

The E/R example--is there any guarantee that the hematoma would have shown up on CT? Trying to see both sides here. The part about it being two weeks out makes the general bystander like myself wonder about how acute it was; is this a common scenario? Curious.

I still think the ex-pharm just wasn't doing his important job at a very basic level. The doctor examples are about juggling a lot of different factors; the pharmacist role is very straightforward and task-oriented.

I always thought that the reason it took a prescription to get filled was that it was double checked, triple checked, and cross checked for accuracy.

The reason is that the downside of giving someone the wrong drug is so high.

Flaunting the detailed procedures necessary to ensure that the correct drug is given should be criminal negligence.

Maybe a good analogy for a surgeon would be one who started an operation without knowing what the operation was for, or the history of the patient. Exploratory on some random person to see what he might find in there.

If you go to http://pharmacy.ohio.gov/minutes/mins07040911.pdf starting on page 21, one can review the Board of Pharmacy minutes in this case.

It would seem that this particular R.Ph. made 17 documented medication errors preceding this fatal one. While I am not in a position to assess the gravity of the errors, I presume that labeling suppositories for oral administration twice is illustrative.

If a surgeon with a decade in the field leaves a lap pad in a 17 separate patients over a period of 2 or 3 years, it is a short leap to imagine such a physician criminally liable, and the hospital doubly so.

He was reckless and indifferent to life and such recklessness killed a kid.

You are missing a very basic point about how our criminal justice system works. Prosecutors ultimately make the decision about whether to pursue a criminal conviction. A prosecutor is elected or appointed by an elected official. No positive publicity comes from seeking "justice" against doctors who make legitimate errors. Those errors are corrected in the civil justice system. This case is the exception, not the rule, and will remain so, because obtaining justice for a dead child who was killed by the gross negligence of the pharmacist helped the city officials' chances of re-election. The examples you give don't lead to public outrage, won't help anyone get elected, and therefore won't be pursued by gov't officials.

Wow. I have to say I'm with Buckeye on this one. Let me focus on the first comment. 'We're punishing poor judgement that results in injury/death'.

Radinc, most all medical decisions come down to judgement. It's easy to say in retrospect that judgement was poor if it results in death, but it may not be easy at the time. Where would you draw the line? Many, many decisions made under duress could be called 'bad judgement' after the fact; if that threatens my liscence, OK, but if it threatens to put me in jail? Hmm, maybe I won't practice at all.