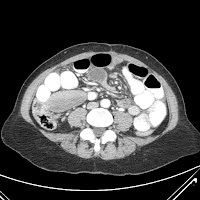 Bowel obstructions in Roux-n-Y gastric bypass patients always make me a little nervous. As opposed to garden variety, adhesion-mediated obstructions in people with normal anatomy, conservative treatment often fails in these patients. For one thing, you cannot adequately decompress them with nasogastric suction. Furthermore, the incidence of internal hernias is much higher, owing to the altered anatomy of the procedure (roux limbs and split mesenteries etc). So going into these cases, your threshold for surgery has to be exponentially higher than normal.

The scan above shows a subtle spiralling of some small bowel mesenteric vessels in the area where one would normally find the jejunojejunal anastomosis. Single views don't do the pathology justice; you really have to be able to scroll up and down through the loops of bowel on the scan. The patient looked uncomfortable, was tender, and I just didn't feel like dicking around for much longer. So I explored her in the OR.

She'd had two previous surgeries, prior to her gastric bypass even, for bowel obstructions secondary to an old hysterectomy, so things were pretty confusing, anatomically speaking, when I first entered her peritoneal cavity. The jejunojejunostomy appeared to be corkscrewed. That was clear enough from the beginning. Then I identified a decompressed limb of bowel going up to the gastric pouch (roux limb, a ha!). And then it looked like a bunch of small bowel had slipped through a space between the roux limb and the transverse mesocolon---classic Petersen's defect. Unfortunately, however, the bowel didn't want to slide back out of the space right away. It was stuck somewhere else further downstream. So I basically had to perform a full adhesiolysis of bowel, starting from terminal ileum and working back. To keep things organized, I literally had to place identifying stitches in the serosa of the proximal bowel as I flipped things back and forth. A couple of times it got a little hairy as the bowel started to turn bluish and I had to reverse my maneuvers, untwist things the correct way. Finally I freed everything up and the bulk of the small bowel was liberated, came rushing out from behind the defect. Looking down, the J-J anastomosis was normal again, the corkscrew configuration gone. I closed the defect, put in some voodoo-ish anti-adhesive Seprafilm and got the hell out.
Posted by Jeffrey Parks MD FACS at 10:00 AM

I am not certain that you are using the eponym Peterson's defect correctly. It actually is Petersen's defect, named after Walther Petersen, a German surgeon from the 20th century. He originally described it in reference to loop gastrojejunostomy, where a loop of bowel herniates behind the anastamosis, superior to the transverse colon. An interesting review article was written in JACS, 207(1):121-124.

Glad to see you back writing, your posts are an inspiration to this young surgeon in training.

Peterson's hernia is a specific entity/complication of roux n Y gastric bypass. The provenance of the eponym may very well be what you describe. But there's plenty of literature on RYGB/Peterson hernias...

Very interesting, though I'm a junior resident and not yet familiar with gastric bypass surgeries and their complications but I enjoyed your post. looking for more .. thank you.

just did a devastating complication that began as a SB hernia thru a Peterson's Defect. you want a great OR photograph let me know - Glenn

Thanks for this post, Doc. It helped a million in understanding what goes on with a Peterson defect. I've been transcribing last 20 years, hadn't encountered one of these before, so I like to do a bit of research so I can get an idea of what goes on, rather than just being part of the machine. Great description.

Hi Dr. Buckeye :)
I'm a post-RNY gastric bypass pt, 4 years out from original surgery, 8 surgeries after the original, including 2 separate reversal surgeries (all lap except the last one was an open abdominal surgery to return my digestive anatomy as normal as possible with a partial gastrectomy). I've had several of these "internal hernias" and obstructions along the way, and they were only found with surgery. Typically my obstructive series is normal (there have been times where they saw some dilated loops of small bowel), CT's are always normal, abdominal pain is always left upper quadrant. They thought that the reversal would cure this problem, I don't think it has. I still have delayed gastric emptying, abdominal pain, and nausea has just become a way of life. Your post caught my attention when I did a search. I have been coming to Cleveland Clinic from Chicago for about a year, they are fabulous and are really trying to help me, but here is my question: Have you heard of cases where even post reversal pts continue to have these internal hernias/obstructions that are not always caught with imaging? As an additional note, I'm the adhesion queen on top of it, so I'm not sure if that factors in. I also work in an ER as a critical care tech, so it really stinks to be on this side of things for so long. I know this sounds desperate, but any chance I can make an appt for an opinion the next time I'm in Cleveland? I am desperate by the way. Thanks for listening. Jules in Chicago julesmagnini@gmail.com

has anyone had a complication from seam guard I have had 26 centermeters removed and more to go.Been a very sick lady. Hope to get well soon.