Mr. Obama, What Are You Doing About the Torture of Bradley Manning? 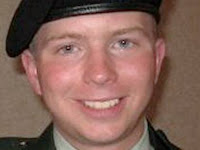 Bradley Manning may have broken the law. He allegedly is the source of the "Collateral Murder" videotape wherein an American Apache helicopter was filmed gunning down innocent Iraqi journalists. But he certainly may have violated military codes by leaking classified information. These allegations warrant an investigation. But Bradley Manning has been held in solitary confinement for 23/24 hours a day for ten months. He is now being forced to sleep nude. He is watched by military personnel throughout the night and is awakened roughly if his face is not visible to the surveillance cameras. Most concerningly, he has yet to be convicted of a crime.

Glenn Greenwald has been an invaluable thorn in the side of the US government's apparent mission to bring down Wikileaks and intimidate whistleblowers who dare to question military/executive branch authority.

His article on what exactly Wikileaks revealed to the world in 2010 is here.

Posts on the inhumane treatment suffered by PfC Manning can be found here and here.

Further embarassing are the brig psychiatrists who are signing off on the forms that deem Manning a "suicide risk", thereby providing the US government with the legal cover to continue its torture of a lowly private. Maybe one day the kid will simply break down and implicate Julian Assange and Wikileaks as co-conspirators. Surely, that's not what our noble, godly military/executive leaders had in mind all along is it??

Why did Manning do it? For money? Because he's a traitor to his country? In his own words:

well, it was forwarded to [WikiLeaks] - and god knows what happens now - hopefully worldwide discussion, debates, and reforms - if not, than [sic] we're doomed - as a species - i will officially give up on the society we have if nothing happens - the reaction to the [Baghdad Apache attack] video gave me immense hope; CNN's iReport was overwhelmed; Twitter exploded - people who saw, knew there was something wrong . . . Washington Post sat on the video… David Finkel acquired a copy while embedded out here. . . . - i want people to see the truth . . . regardless of who they are . . . because without information, you cannot make informed decisions as a public.

This should not be tolerated. Obama is just Black Bush. These wars are illegal and should be approved by the CONgress. It's a good thing when you go to the airport you get molested by a short bus riding TSA agent. I'm glad the border is well guarded because last time I checked terrorists can just come right over via Mexico. Please sense the sarcasm.

Watched 5 minutes of a Cavs game, thought I'd stumbled on an old Harlem Globetrotters/Washington Generals game by accident...

Thats Torture with a Capital "Torch"