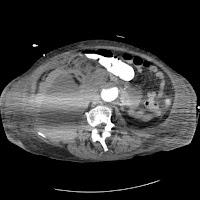 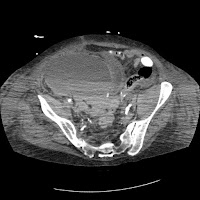 Serena Williams was in the news recently. Apparently she was diagnosed with a pulmonary embolism last week. These typically arise from blood clots in the leg or pelvic veins that break off and propagate into the pulmonary arteries. Patients present with shortness of breath, chest pain, blah blah blah. You can also die from them. I'm not going to spend all morning writing about why you get them; the thought of doing that is excrutiating to me. Google it if you like.

I bring the story up because it sounds like Ms Williams had to undergo an emergency operation this week, several days after the original diagnosis of PE. All the news organizations are writing headlines like "Serena has emergency operation for Pulmonary Embolism". That strikes me as odd. Treatment of PE is typically not a surgical problem. Treatment involves placing one on the blood thinner coumadin for 6-12 months. Because coumadin takes several days to "kick in", a lot of docs will bridge the anti-coagulation therapy with either a heparin drip (inpatient) or subcutaneous high dose Lovenox (can be administered as an outpatient). In rare cases, such as when the patient presents in extremis, an emergency embolectomy is performed via a sternotomy while the patient is on cardiopulmonary bypass. Catheter directed fibrinolysis has also been described as an option for these very sick patients.

So in general, surgical intervention for a PE is a sign of impending doom--- it's unlikely Serena Williams had her chest cracked open. More plausibly, she required invasive intervention for a complication of the anti-coagulation therapy that all patients with PE's are administered. Spontaneous bleeding from the retroperitoneum spaces is a known, not uncommon, complication of lovenox or heparin induced anti-coagulation.

The pictures above demonstrate the extensive retroperitoneal hematoma of a lady I took care of several months ago who had been started on high dose lovenox and coumadin for a heart arrythmia. Initially you try to correct their coagulopathy and transfuse packed red cells because most of these spontaneous bleeds will eventually tamponade. This lady kept bleeding. I think she received something like 12 units of packed red cells, 10 units of plasma, and several transfusions of platelets and cryoprecipitate. Furthermore, the massive hematoma was starting to compress the right kidney, leading the renal consultant to believe that its very viability was compromised.

Reluctantly I took her for surgery. These aren't fun surgeries. Outcomes are generally pretty poor. Often, you never pinpoint the source of bleeding. You just scoops giant handfuls of gelatinous purplish-black clot into shiny metal bowels, coat the raw surfaces with thrombin/topical clotting agent and hope things don't get out of control. For some reason, just evacuating the hematoma can help halt the death spiral of sustained fibrinolysis that evolves in the setting of large in-situ clots. Anyway, she did allright and went to a nursing home.
Posted by Jeffrey Parks MD FACS at 5:56 PM